skip to main | skip to sidebar

Between the busy interstate and industrial area of Winchester, Van Meter Road stretches out into the quiet farmland. After a couple of miles, the road turns into a gravel drive, at the end of which is a tiny wooden bridge. It straddles the railroad tracks below where it is said that four teenagers jumped to their deaths during a night of partying. 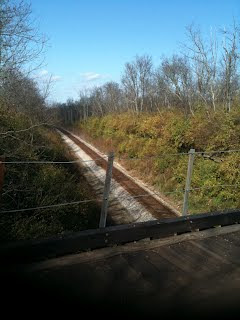 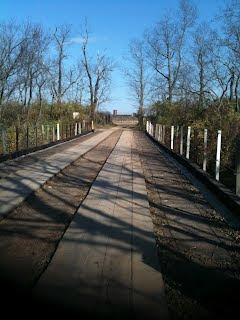 Call me crazy, but I don't think this is quite high enough to kill. Injure, sure! Broken bones, absolutely! But kill? Unless of course the train hit them. I don't know much about the story, and my friend who told me about it is no longer with us. If you know, write me! 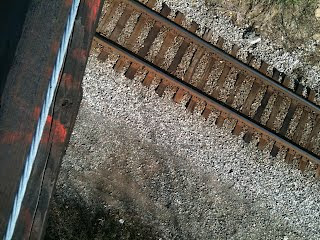 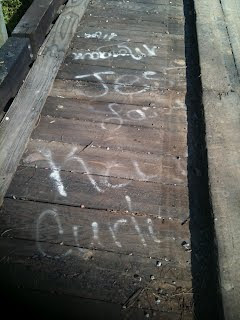 There is no shortage of poorly executed graffiti. 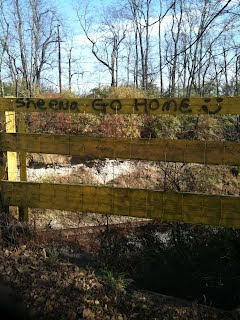 After reviewing my photos I ran across something strange I hadn't noticed before... The photos which depict the southern side of the bridge have a fog present that is not there in the others. It was a very clear day. 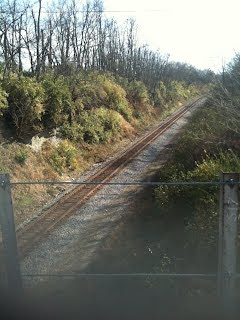 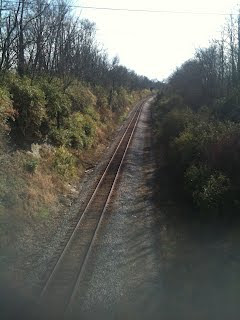 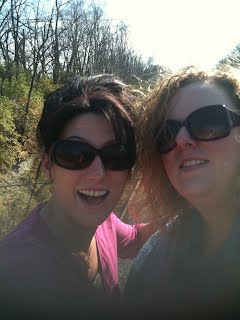 Kinda weird!
Posted by Nicosia at 10:11 PM No comments:

Lil Momma doesn't like the cold, and I tend to be an indoor animal when winter sets in. But-the air is finally warm again and that means time for roadtrippin! There are plenty of new things to tell you about. First of all- The neon sign at Little's has been restored to it's former glory! Several abandonments I have written about have since been torn down, and there are a ton of new pics coming soon...
Posted by Nicosia at 3:21 AM 1 comment: 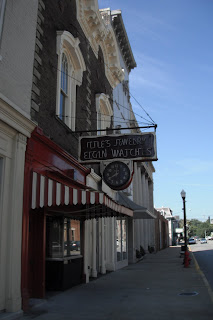 This little jewel of an abandonment is on Main Street in downtown Mt. Sterling. I'm not sure how long Little's Jewelry has been closed, but to my eye, it looks like at least the eighties. 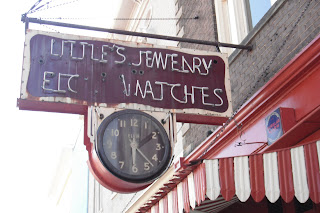 The blue box above the awning says "Burglar Alarm". I would love to get into the apartments upstairs and see what's there. 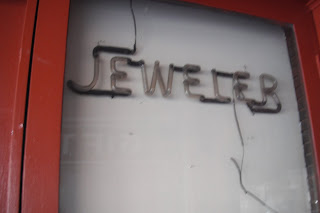 Check out the old neon work! Wonder if it were plugged in if it would still fire up? 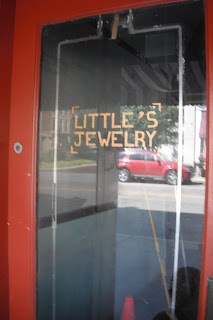 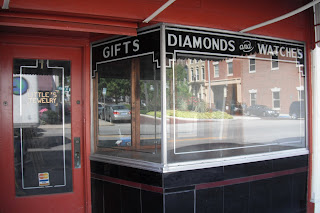 The Weirdness Next Door... 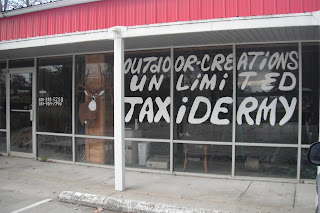 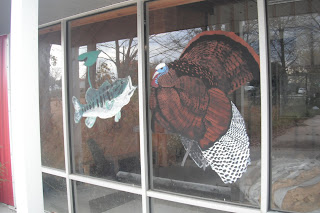 I always feel kinda redneck when I tell people my beauty shop is "next to the old taxidermy place."
Posted by Nicosia at 10:53 AM No comments: 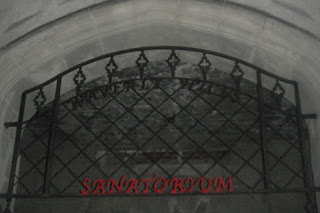 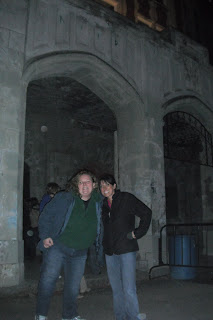 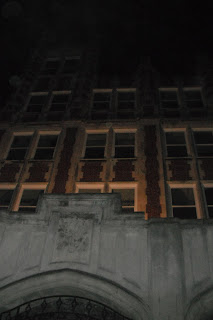 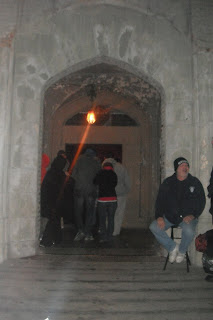 As far as reportedly haunted locations go, Waverly Hills Sanatorium is a legend. The hospital building was completed in 1926 and was considered to be one of the most modern facilities for treating the disease tuberculosis. Patients with TB had to be quarantined away from the general public. Before antibiotics, the prescribed treatments involved plenty of rest, fresh air, and sunlight. The hospital had long porches called solariums where the patients would be wheeled outside, even in the winter. Electric blankets were invented specifically for sanatoriums to assist in this practice. If the weather was too inclement to take them outside, the patients would sit under sunlamps in the hope that the ultraviolet light would kill the bacteria. If these treatments didn't work, the last resorts were Pneumothorax and Thoracoplasty. Both surgical procedures seem downright brutal by today's standards, but back then, it was all they had. Pneumothorax was a way of collapsing part of the lung and giving it a chance to heal. It also closed any holes the disease may have caused. Thoracoplasty involved opening the person's chest and removing some of the rib cage bones. It was only safe to remove a few at a time, so many patients had to endure the agonizing procedure several times before it was complete.

Of course, no discussion of Waverly is complete without mention of the Body Chute aka the Death Tunnel. At the height of the epidemic, patients were dying every day. In order to keep up the spirits of the living, the staff discreetly removed the dead bodies using the underground passage, which employed a rail car wench system. It was originally constructed to bring supplies and heat up to the hospital, but also served as a good way for the staff to get up and down the hill in the winter. Over the course of the years, approximately 30,000 people made their last trip down the hill in this fashion.

After the invention of antibiotics, sanatoriums were no longer needed. Waverly was closed down, disinfected, and re-purposed as WoodHaven, a geriatric home. It was closed down in 1980 by the state due to patient abuse. The building sat abandoned for many years. In that time, the legends surrounding Waverly only grew...

Many specters are said to still haunt the premises. One of the most famous stories is the nurse of room 502. According to the tales, she was unmarried and pregnant. Supposedly, she was so overcome with grief at her situation, she hung herself in room 502. Her presence has been felt by many, especially pregnant women. They are said to get very sick and dizzy when they go into this room. A few years later, another nurse committed suicide by jumping out the window of 502. No one knows why she did it.

A homeless man and his dog lived here while the building sat unused. He fell down an elevator shaft to his death, but is often seen along with his ever-loyal dog who never left his side. There have been many reports of disembodied voices and poltergeist activity, but to me the most unsettling involve the children's ward. In that area of the hospital, voices have been heard singing "Ring Around the Rosy." Creepy!

Waverly Hills was bought several years ago by Charlie and Tina Mattingly who have been working tirelessly to restore and preserve the site. Every year they put on one heck of a haunted house! My friends and I went a few nights ago, and while we had to wait for four hours in line, it was absolutely worth it. It was a great show, and the tour seemed to go on forever. It was very dark, so my shots of the exterior didn't come out as well as I had hoped. They also do overnight visits, but they sell out quickly! We were going to go this summer, but they were already booked up, so make those reservations early. 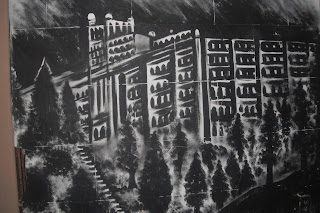 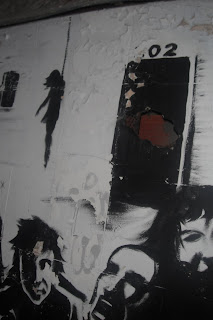 I have been to this place twice and can tell you from personal experience that there is an energy here. Whether you believe in these things or not, it isn't anything I can really describe except a feeling of imposing. The building and the grounds resonate with something more than we can see and I can't wait to go back to find out more!

Shoes by the Road 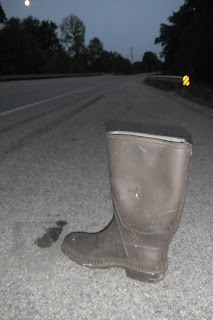 Every time I see a shoe by the side of the road, I am filled with so many questions... Who lost a boot? Where were they going? What happened to the other one? This is an old work boot I saw on 460. My best guess is that someone had it on the back of a truck and it fell off. Any other ideas?
Posted by Nicosia at 3:52 PM 3 comments: 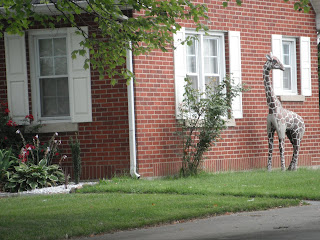 I love creative lawn ornaments and this one takes the cake! A big giraffe peeks out from beside a house in downtown Mt. Sterling. Look carefully, or you might miss him!